Two wins or nothing 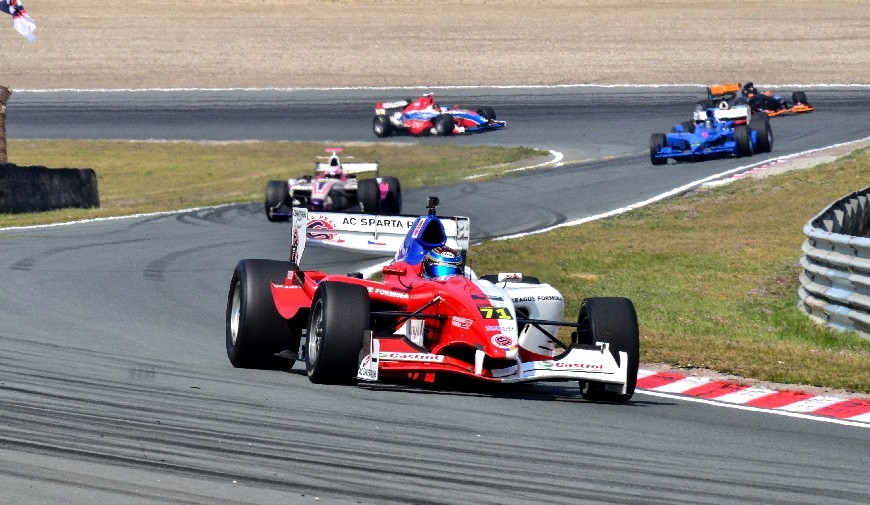 Two wins or nothing

At the wheel of his Panoz racecar, Easy Formula’s driver Christopher won the inaugural race of the Maxx Formula series.

Despite the difficulties encountered during the winter, the Maxx Formula series is now officially one of the few racing series for single-seaters in Europe. Easy Formula team made the trip for the opening meeting which took place from May 17th to 19th at the Zandvoort circuit.

In the first free practice session, Christopher had an engine problem and had to use the spare car for the rest of the weekend. This did not prevent him from being the fastest in the Advance category during the qualifying session and achieving the third fastest time overall.

He started from the second row for the first race on Saturday, behind the Dutchman Zwart on Jaguar F1 and the Austrian Herndlhofer on Arrows F1. The latter broke his engine early in the race, causing the intervention of the safety car. Shortly after, the leader Zwart had to go through his pit due to technical problems. At the restart, Christopher was in the lead, he widened the gap and became the first winner in the history of the Maxx series!

The second race was held Sunday, just after a demonstration from Red Bull Racing drivers Max Verstappen and Pierre Gasly, and in front of nearly 100,000 Dutch fans. After a quiete race, Christopher finished second and first in Advance class. But when race winner Zwart was disqualified, Christopher took his second win in two days.

Next meeting is on July 6th and 7th at the Slovakiaring circuit.