Nearly a complete success in Dijon

HomeCompetitionsNearly a complete success in Dijon 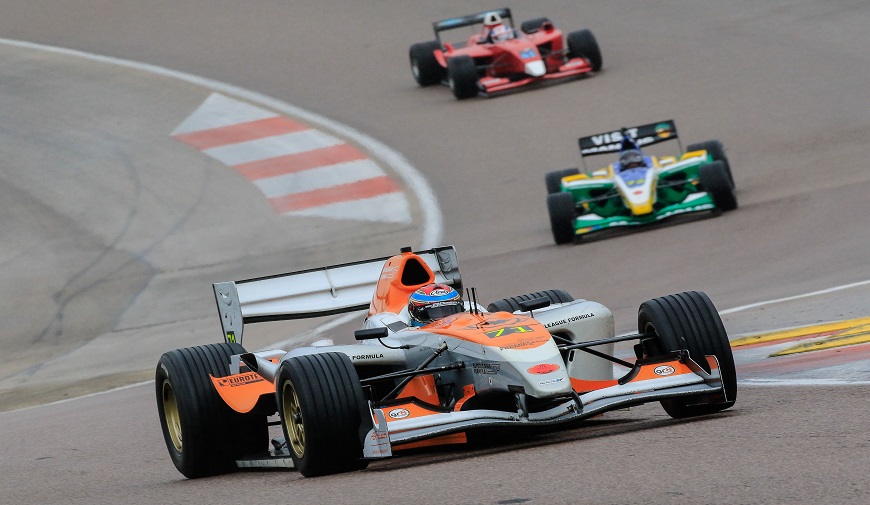 Nearly a complete success in Dijon

The Easy Formula drivers make their mark on the final of the Maxx series, Christopher won the two races and Gilles joins him on the podium.

The Dijon Motors Cup taking place in October on the Dijon-Prenois circuit, was the last meeting of the 2019 Maxx Formula series. The Burgundy layout is one of the fastest in France with average speed exceeding 120mph.

The free practice sessions were held on a wet and slippery track. At the wheel of their Panoz Superleague Formula, Gilles and Christopher were in the forefront and showed that their competitors would have to rely on them again this weekend. Their good performances were confirmed in qualifying: with a superb laptime just 0.3 seconds from pole position, Gilles secure a front row start while Christopher realized the third time.

A heavy shower flooded the track half an hour before the start of the first race. The start was given in very difficult conditions requiring a great finesse of driving. Christopher made a good start and overtooked Gilles for the second position. The poleman Kindler quickly made a mistake and the driver of the 71 car settled at the head of the race. A position he kept until the checkered flag. Despite a small fright in the penultimate lap, Gilles finished in second position and offered a 1-2 to the Easy Formula team.

Determined to end the season with a victory despite the rainy condition, Christopher quickly took control of the second confrontation. For his part, Gilles was overtaken by a competitor at the beginning of the race. He resumed his position just when the safety car was taking the track, the time to remove a car who had finished its race in a gravel bed. At the restart, Christopher did a serie of quick laps, including the fastest lap of the race, and won his second race of the weekend. Gilles went under the checkered flag in second position, but he was penalized for its earlier overtake and eventually had to go back one rank.

Winner of the opening round in the Netherlands and of the final race in France, Christopher clinch the Advance classification of the Maxx Formula Championship. After two years of absence in competition, Easy Formula demonstrates once again its skills and know-how.